The final advertised talk in this year’s series, which was to be Pauline Ridley on “Dallington’s Reading Room 100 years ago: what were they reading and why?” on 24th March, has been POSTPONED in accordance with current NHS guidance to  reduce the risk of Coronavirus (COVID-19) infection by avoiding large group meetings.

The World Day of Prayer service was held at Dallington on Friday March 1st. As well as members of the congregations in our benefice we were joined by friends from Heathfield. The service, which had been prepared by the women of Slovenia, was very thought-provoking, and the title, “Come, everything is ready”, welcomed and included all present.

History Group: the last two meetings of this Spring will be:
Wednesday April 10th  Jenny Stiles will talk about Dallington after 1066.
Wednesday April 24th Douglas Sewell (postponed from March) on Dallington’s war graves
Both meetings in the Old School from 7 for 7.30pm

Flower Club Angela has written a note about the Flower Club:
I am very sorry to say that, reluctantly, it has been decided to finish the monthly meetings. This is mainly due to the lack of support and interest. Looking back, we have learned a great deal and had many happy afternoons. I think it began some 8 or 9 years ago when Dorothy Messer approached Pam Fuller with the idea of starting a flower-arranging group locally. We have made large and miniature arrangements, used a kitchen utensil and a dustpan, made Harvest and Christmas wreaths, joined in with a couple of Flower-Festivals and learned to make Christmas arrangements to use at home. I also remember trying to make crepe-paper poppies, daffodils and anemones. How hopeless we were. Pam used to tell us that the Brownies she taught were much less awkward than us! Many thanks to Pam for all her help and enthusiasm over many happy Thursday afternoons.  Angela.

Dallington WI. At our February meeting we had the pleasure of listening to our neighbour, Robin Taylor, talking about the life and work of Elizabeth Bishop, a poet of whom he is very knowledgeable. We very much enjoyed hearing Robin share his interest.
In April we look forward to a return visit from Chris McCooey, with his talk entitled, ‘News from the Home Front’. The April meeting will be in the Old School Village Hall at 7.30pm on April 18th.
Please note the summer evening time and do not get caught out by arriving in the afternoon. Visitors are always very welcome.
Bobbie

Library Cafe As usual the Library Cafe is open in the Old School village hall every Monday (except Easter Monday) from 2-4. The monthly Saturday morning openings are April 6th and May 4th 10-12. We will be including a sales table for plants and produce in all Saturday sessions throughout the season – please bring along any spare plants, seeds and garden produce to swap or sell

The first History Group event of 2019 will take place on Wednesday 27th February in the Old School Village Hall at 7.30.

Roy Iremonger will be talking on”Policemen in Dallington”.

Please note that this year, all  talks will be on Wednesdays instead of Tuesdays as previously.

The organisers wish this to be a social event; there is no admission charge but a small contribution towards expenses is welcome.

(posted on behalf of our Tree Warden, Doug Edworthy) 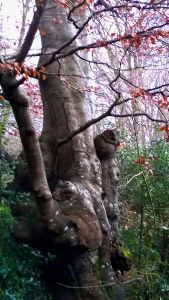 Just inside Dallington Forest, and close to a public bridleway, there is a culturally-important tree that is not well known in the area – perhaps because it is difficult to find without guidance. We have Tree Warden-led walks into the Forest that take in this tree – so come along on the next walk!

As part of the Dallington Forest Project I’m attempting to gather all relevant information together to document it for the benefit of current and future generations before it is lost to the ravages of time and decay.

Known locally as the ‘PoW Tree’ this is a veteran pollarded Beech tree, probably around 250 years old, that is rapidly approaching an untimely end. Much of the interior of the trunk’s base has been hollowed-out by fungi, and the opinion of an experienced arborist is that the trunk will fail catastrophically within the next few years.

The tree gets its name from graffiti carved on its trunk some 3 m off the ground. The inscription (presumably by a prisoner of war from Cologne, Germany) reads: –

There was a German Prisoner of War Working Camp GPWW 145 situated at Normanhurst Court, Battle, less than 10 miles away, continuing to hold prisoners until 1948.

I understand that the Normanhurst PoW camp supplied labour to the Gypsum Mines at Mountfield and, at the time, much of Dallington Forest was under the management of the Mine. It is not inconceivable that parties of PoWs would have been employed as foresters and, perhaps during a lunch break, one of them climbed the tree to leave his indelible mark for posterity.

Who was ‘TB’? Or was the graffiti artist’s name actually ‘T.B.KÖLN’? Perhaps records could solve the riddle of his identity.

Sadly, I understand that most of the records of the PoW camps’ occupants were destroyed after the war. Was this related to the slow repatriation of Axis forces to German and elsewhere compared to the relatively speedy repatriation of PoWs back to the UK? Is there a darker political secret waiting to be unearthed? It would be interesting to find out.

Before this tree falls and is lost – it could be in a gale this autumn – we have a limited opportunity to document and record this culturally-important tree for posterity.

For example; wouldn’t it be wonderful to have a bark rubbing done of the inscription that could be framed and displayed together with information about the tree and the inscriber in the Brightling and Dallington Village Halls?

And we need urgently a good photographic record to show not just the details of the inscription but the tree in its surroundings and context.

Help from amateur (or professional) archivist and historians would be very welcome to research such records as exist of the Normanhurst Court PoW camp, its occupants and the Gypsum Mine and its management so that we can add more of the human dimension to the history of this tree.

If you would like to print out this information to share it more widely, you can download it as a PDF flyer here  Dallington PoW Tree

(Posted on behalf of Bobbie Steel)

The names of loved ones for whom Easter lilies have been chosen will be read out at the Easter Sunday service.
Advance notice:  FLOWER FESTIVAL in St. Giles on June 1st, 2nd and 3rd.

FLOWER CLUB:  This is scheduled to take place on Thursday April 5th in The Old School. The topic will be ‘Summer Sunshine ‘.

LIBRARY: The mobile Library will be in Dallington Street on Tuesday April 20th between 2.20-2.50pm. The service will be very much missed when it is withdrawn.

HISTORY GROUP:  there will be two meetings in April, on
Tuesday 3rd Jenny Stiles will talk on Dallington, on the 17th Douglas Sewell will tell us about ‘Shipwrecks with local connections ‘.   The organisers wish this to be a social event, there is no admission charge but a small contribution towards expenses is welcome.

ART CLUB:  We meet every Monday morning 10am-12 in the Old School. We have recently acquired a large noticeboard so we can display a changing selection of members work. New members welcome – more information at the Art Club page of this site

WI. Due to a variety of causes, mainly illness, our meeting in March was rather poorly attended. We were sitting, rather glumly, in the village hall until Mary D came up with the idea of us going back to her house. A most enjoyable afternoon followed, in fact one member was heard to say that playing Scrabble was better than having a meeting with a Speaker. The very idea!

VILLAGE HALL: such a lot of work is going on and soon there will be a bright new kitchen. A library / book swap is planned, possibly one morning a month when there will be cafe style seating with refreshments. Two large bookcases are waiting to be filled with bestsellers. Watch this space.