Located in The Street, Dallington Old School Village Hall is available for hire daytimes and evenings. 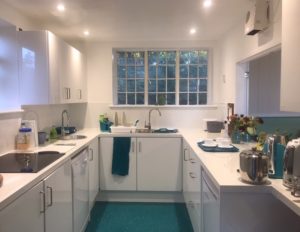 The kitchen has recently been fully refurbished to a very high standard.

Please call Karen Gillingham on 01435 831563 to enquire about bookings.  Standard rate is £10 per hour, but local groups using the hall on a regular basis may receive a discounted rate.

As well as hosting regular groups such as the weekly Art Club, monthly Book Club, Poetry Group, new Villagers Group and the History Group,   we now have a weekly Library Cafe on Monday afternoons from 2-4pm. Designed to fill the gap left by the closure of the Mobile Library, we have a very large range of fiction and non fiction books and DVDs. Tea, coffee and biscuits are served and the sessions are proving popular social events

The building was originally the Dallington Village School, completed in 1854. It remained in use as such until 1913, when the nearby Dallington C.of E. Primary School was built; this school now also serves neighbouring villages including Ashburnham, Brightling and Bodle Street. After that date the hall (subsequently known as the Old School ) became a Billiards Room, Reading and Club-room and Sunday School. After a number of changes, especially in very difficult times during and immediately following the Second World War, it is now held under a Trust Deed dated 12 April 1984 as a public charitable trust registered with the Charity Commission (number 289652) whose aims are to provide:
“a village hall for the use of the inhabitants of the Parish of Dallington..without distinction of political religious or other opinions, including use for meetings, lectures and classes, and for other forms of recreation and leisure-time occupation.. with the object of improving the conditions of life for the said inhabitants.”

Under the terms of the Trust, the hall is run by the Committee of Management which includes four local residents elected at the Annual General Meeting and representatives from each of the groups which regularly use the hall. The officers are then elected by and from the committee members.  Do please get in touch with any of the committee if you would like to get involved or can help in any way to keep the Hall going as a vital village asset. The current committee is as follows:

Back to main “Local Information” page